skip to main | skip to sidebar

Since October 2002, children attending public schools in the city of Rio de Janeiro are having the opportunity to learn more about Brazil’s food history and habits through “Projeto Mandioca”, a project developed by Teresa Corção, chef/owner of restaurant “O Navegador”, in downtown Rio.

For over 25 years in food business, Teresa believes that the project will help children to better appreciate their own families’ culinary treasures, as well as to enhance their interests for the products, tastes and aromas of the Brazilian culinary.
“Manioc was and still is Brazil’s bread since the times when the Portuguese colonizers had not yet arrived to these lands.
As a major source of carbs, manioc provides the energy needed to face hard works, and can be considered as the “blood of Brazilian land”, reminds Teresa.

The real importance of this product is mostly unknown, although it is very much used and appreciated in our daily meals. In the very first contacts that the discoverer of Brazil – Pedro Alvares Cabral – had with the Indians Tupiniquins, in the south of the state of Bahia, he was introduced to manioc, a native product of those yet unexplored lands.
To our native Amerindians, manioc was the most important ingredient in the preparation of different meals such as porridges, cakes, breads (pirão, beiju, mingau ,paçoca).

As the European wheat was not suitable to the climate of the newly discovered lands, the colonizer had to get used to manioc, a root so much appreciated nowadays throughout the world.

No other product is as much Brazilian and has such an importance as manioc.

With this in mind, and working together with a team of experts Teresa decided to launch her project. Through workshops in public schools, children learn the importance of manioc during informal classes, theater and hands on cooking demonstration, learning how to prepare tapioca and other traditional Brazilian dishes. This way they strengthen their relationship with their Brazilian identity. 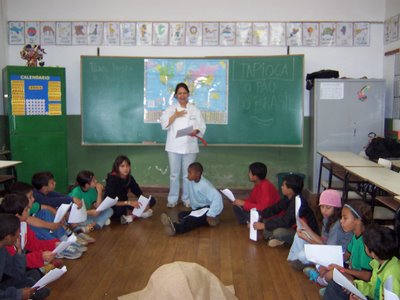 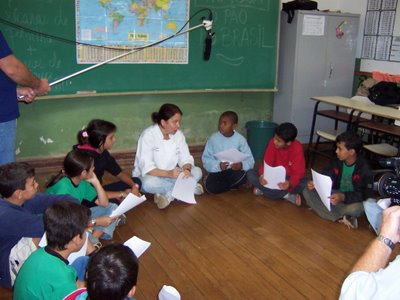 This organization maintains Projeto Mandioca permanently updated in whatever concerns manioc in Brazil and worldwide, while improving its research studies on the subject.

Did you know that...

1-Over 4 million Brazilians depend directly or indirectly of manioc culture
2- The very first Brazilian Constitution was called “Constituição da Mandioca” that is Manioc Constitution, thus showing how much manioc symbolizes to our national identity
3-Manioc sediment (fecula) is a powerful starch very much used in industry such as pharmaceutical, textile, pulp and paper industries besides many different uses in food industry
4-Manioc leaves have high concentration of calcium, iron, vitamin A and proteins. A preparation with the dehydrated and powdered leaves is being distributed to low-income population in the country.
The Ministry of Health as the most important ally against sub nutrition is considering this action.
5- The state of Pará is the most important producer of industrialized manioc meal while the state of Bahia is the larger artisan producer of manioc meal.
6-There is a project going on at the Deputy Chamber, which tries to include or substitute part of wheat flour for manioc flour in the preparation of daily bread and other preparations. Embrapa is researching if this would improve the protein values on the bread presently consumed in Brazil
7-Nigeria is the world largest manioc producer; our Portuguese colonizers took this native Brazilian root there
8-Thailand, which also received the root from our Portuguese colonizers, is the largest worldwide exporter of manioc starch mostly to European Union.
It is interesting to notice that manioc is not used there as food.
9-Brazil has a surplus of manioc starch (fecula), which has rendered useless because its exports are not competitive in the European Union.
Thailand, which is the largest exporter, enjoys a zero tax bracket, while our product is charged by a tax above 20%.
10- Brazil produces 23 million tons manioc behind only to Nigeria whose production is of 34 million tons.

Email ThisBlogThis!Share to TwitterShare to FacebookShare to Pinterest
Labels: brazil

IACP Member Sheila Crye
The International Association of Culinary Professionals (IACP) is a worldwide forum dedicated to connecting culinary professionals across the globe with the people, places, and knowledge they need to succeed. With nearly 2,000 members from more than 32 countries and every culinary discipline, this diverse organization of talented professionals is committed to excellence in the culinary industry. IACP members are leaders in their respective professions, working together to inspire, celebrate, and shape the world table. Visit us at www.iacp.com for more information on membership and upcoming events. Global Blog Administrator: Sheila Crye